Large digital book below that may take a minute to load…

To be a welcoming community for everyone, the City of Clearwater needs to preserve and sustain affordable homes for everyone. 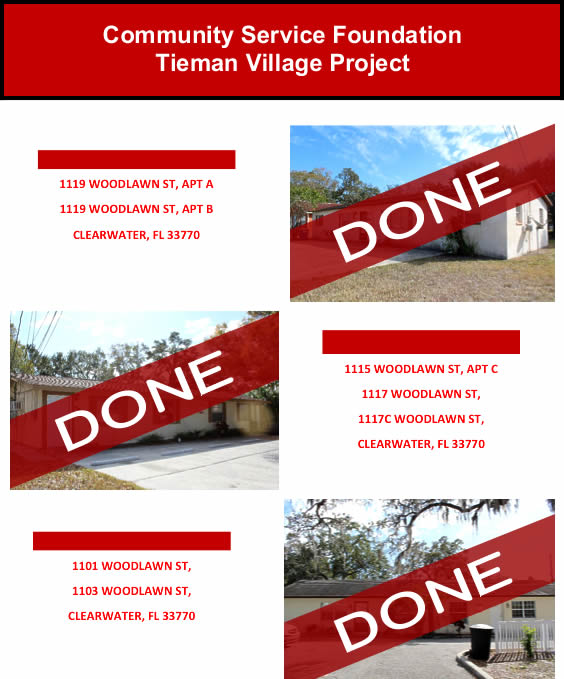 For many low to moderate-income residents, their housing is a source of stress rather than respite. Families paying more than 30% of their income for housing are considered cost burdened. Thousands of working families are paying more than they can afford for housing, and cutting back on necessities like nutritious food and health care as a result. Other low to moderate-income families respond to high housing costs by living in substandard housing, doubling up with family and friends, or moving frequently, all of which have negative impacts on their health, their children’s education, and the wider community. By contrast, an adequate supply of affordable housing helps families put down roots, stay healthy and get ahead.

As a 501(c) (3) nonprofit organization, Community Service Foundation (CSF) honors our mission to alleviate homelessness by seeking community conscious partners to serve low-income families of Pinellas County with affordable housing, a healthy living environment, and support services and training. CSF recognizes that every community partner in this effort to end homelessness—private, public and nonprofit—is an essential piece of the puzzle. Together with our partner agencies, the City of Clearwater, Economic Development and Housing Department and the Pinellas County, Community Development and Planning Division, we will ensure affordable housing is intentionally maintained and preserved, sustain the City’s stock of affordable housing, improve neighborhood stability, and change how people live.

Per the City of Clearwater’s 2016-2020 Consolidated Plan, “Generally, the City is lacking a diverse distribution of housing types. Most housing units in the City are within detached single-unit structures (38%) or within 5 or more-unit structures (43%). This indicates a predominance of single-family homes and multi-family apartment or condominium types. In contrast, only 13% of all housing units are within attached single-unit structures or 2-4-unit structures, indicating a lack of townhome, duplex, and triplex types. This distribution does not provide a diverse selection of housing for low- and moderate-income residents who may not be able to afford a single-family home but require multiple bedrooms…. A shortage of affordable housing may exist for very low- and low-income households in Clearwater; and given the City’s housing stock profile, there is a lack of diversity of housing types within the City. Most housing units are within either single-unit detached structures or multi-unit apartment/condominium structures. Few units are within other attached housing types (e.g. townhome, duplex, etc.). Moreover, there are few smaller (1 bedroom or studio) units available.”

The Lake Bellevue Neighborhood Revitalization Strategy Area (NRSA) is bounded by Evergreen Drive to the east, South Ft. Harrison Avenue to the west, Lakeview Road to the north, and Belleair Road to the south. The Lake Bellevue NRSA corresponds to Census Tract 025800, Block Groups 1, 2, and 3. 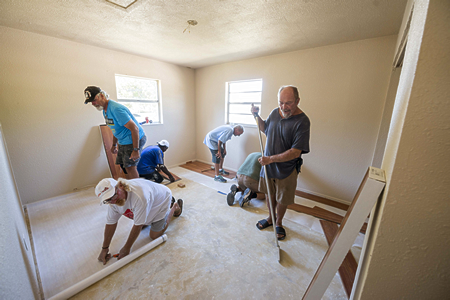 The Lake Bellevue Neighborhood Revitalization Strategy Area (LBNRSA) has a population of 3,609 persons of which 69.7 percent are considered of low- to moderate-income.
The 2005-2009 American Community Survey reported that persons living below the poverty level during the past 12 months in Lake Bellevue Neighborhood represented 30% percent of the population.
The total land area for the LBNRSA is approximately 0.7 square miles.
The population in the area is relatively young, with the median age being 34.3. Approximately 865 families live in the area, with 58% of the families (502) living as married couples, and 32% of the families (279) living as single female head of household, with no husband present.

These complexes are home to up to 232 county residents most vulnerable to homelessness; 100% of the residents are low- to moderate-income families, and 34 % of the households are special needs population.

The first indicator of community support is how well the population is protected and able to live and work in safety. The Lake Bellevue Neighborhood is a leading crime area, according to Clearwater Police Department; the 2014 and 2015 crime statistics in Zone 745 (comprised of the Lake Bellevue-South Greenwood Neighborhood), include 70 arrests for burglary, robbery and drug related crimes. Possession of a controlled substance arrests comprised 69% of the crimes, an increase of 17% in 2015.

During the same period, police made 25 juvenile arrests for burglary, grand theft auto, and possession of controlled substance, with burglary-residential arrests accounting for 28% of the total juvenile arrests. 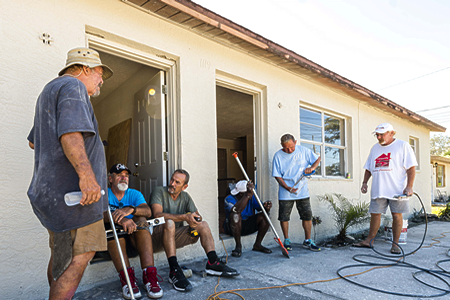 All of the City’s NRSAs are characterized by older housing stock, a lack of owner equity, sporadic “strip” commercial development that is not compliant with City codes for zoning conformity or accessibility, and property values that are generally depressed in comparison to the balance of the City. The Lake Bellevue NRSA, in particular, is predominately residential. A large percentage of the population is considered low- to moderate-income and a significant percentage of the population is living below poverty level. According to HUD CPD Maps, the Lake Bellevue NRSA has a low- and moderate-income population of 59%.

This area was designated as a NRSA in the year 2000. Representatives of the Lake Bellevue neighborhood attended a Community Meeting held on March 29, 2016. During that meeting, attendees confirmed the Lake Bellevue NRSA’s need for continued housing and community development funding by identifying affordable housing; services for the homeless, youth, and elderly; and community development activities as their highest priorities.